The inspiration for Horse Fever came two decades ago when Ocalans Laurie Zink and Paula King visited Lexington, Kentucky, and saw the city’s Horse Mania arts project. At that time, public art projects were coming to life in a few other cities, both in the U.S. and internationally.

When the original Horse Fever “herd” debuted in 2001, the skills of 53 artists went on display as the horses were auctioned off and exhibited throughout Ocala.

Horse Fever was a novel way to promote and support the arts while exposing the public to quality art in the local environment. That first auction raised more than $800,000, with half of the proceeds going to local charities. It also established the seed money to launch MCA’s annual endowment with annual proceeds funding the organization’s cultural grants.

Horse Fever memorabilia was also made available for purchase at the Brick City Center for the Arts, home of MCA in downtown Ocala.

“Horse Fever was the first time our community experienced public art with free access for people to see it, touch it and take photos of it. Now public art is everywhere,” says Jaye Baillie, MCA’s executive director.

Indeed, many of the horses from the original Horse Fever herd of 53 horses still grace public spaces in Ocala. And by the way, they make great photo ops!

The initial Horse Fever public art project was so well-received, that in 2005 MCA created Horse Fever in Motion, which included 8 horses. To commemorate Horse Fever’s 10th anniversary in 2011, MCA unveiled another herd featuring the work of 31 artists.

Now, Horse Fever rides again as a fourth herd of 15 horses appears in Ocala this spring.

“Some artists have participated in all four herds and for others, this is their first time, but all are Florida artists, and most are from this area,” says Baillie. 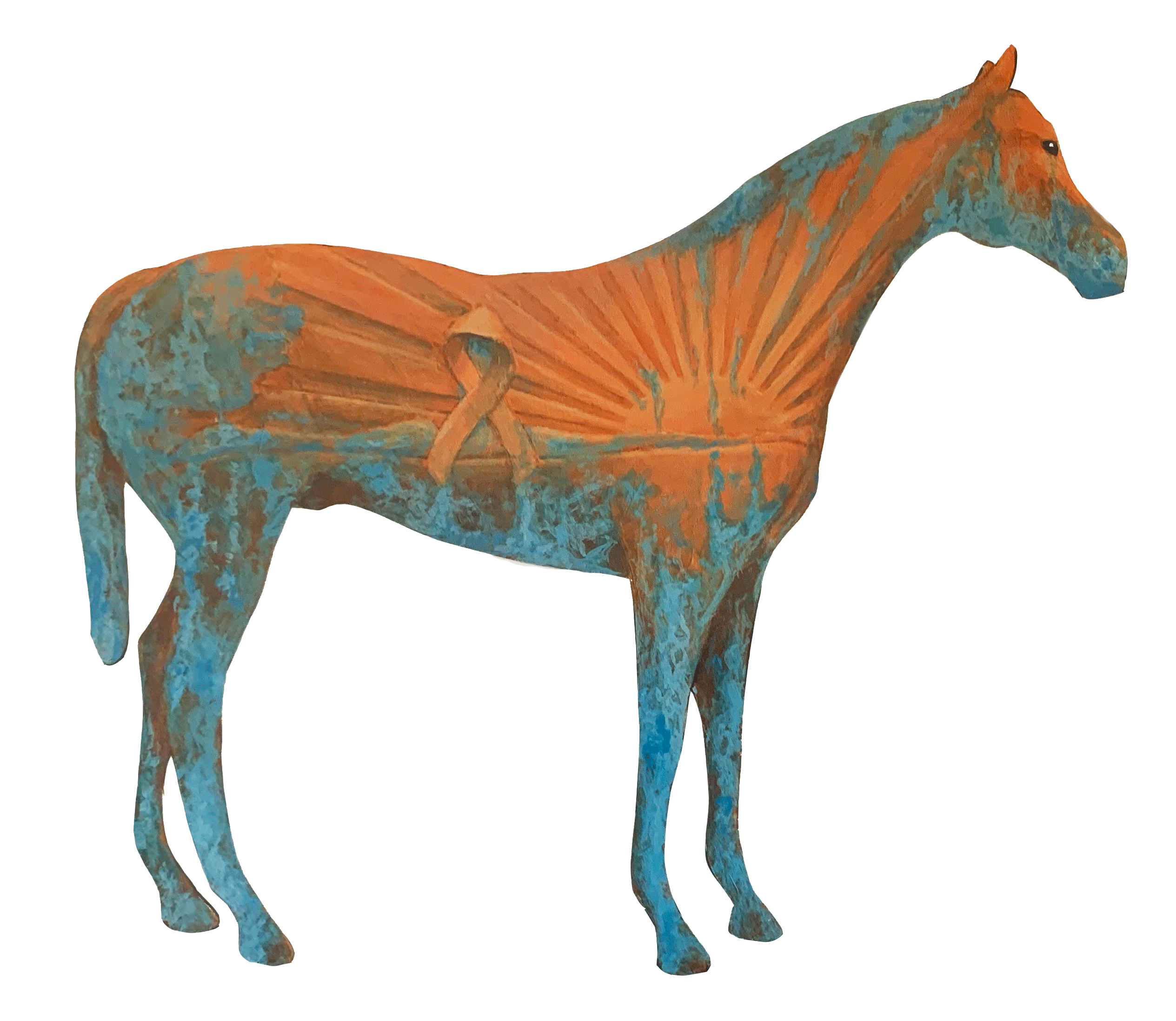 The original rendering of ‘Hope’ by artist Paul Ware.

A call to artists was issued in July 2020, inviting them to submit renderings.

“We secured three jurors from universities and museums to score them,” explains Baillie. “We had over 60 submissions and the 25 which scored the highest by the jurors were then presented to patrons, like Showcase Properties.

“Jaye gave us the portfolio of artist renderings and I let the agents help with that process,” says Valerie Dailey, owner/broker of Showcase Properties of Central Florida, Inc

“I thought it was smart on Valerie Dailey’s part that she used her team to help decide on their top three choices,” adds Baillie.

Patrons served as sponsors for the project. Each participating patron paid $30,000 and in return they receive a completed Horse Fever horse installed at their chosen location.

All proceeds go to MCA to support arts in the non-profit arts community. Most patrons are local businesses, although three anonymous donors were also patrons.

“One of the reasons I support Horse Fever is because the arts are so important to a community. They’ve tied horses in so the horses support the arts and the arts support the community,” says Dailey.

“Hugh was able to be involved 20 years ago and now it’s my turn to give back to the community,” notes Dailey, referring to her husband Hugh Dailey, president of Community Bank & Trust, and their purchase of “Aggie” from the original Horse Fever Herd in 2001. 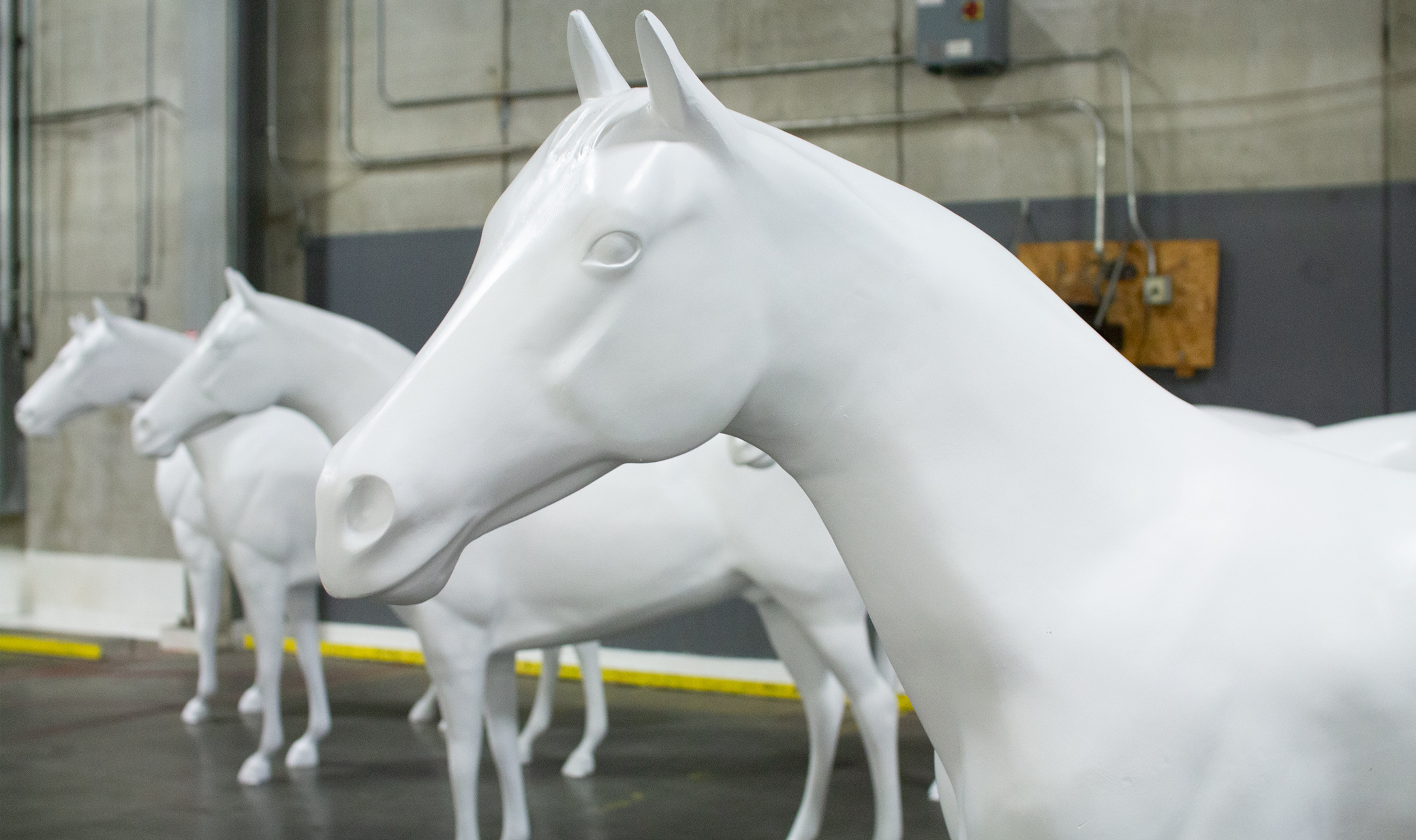 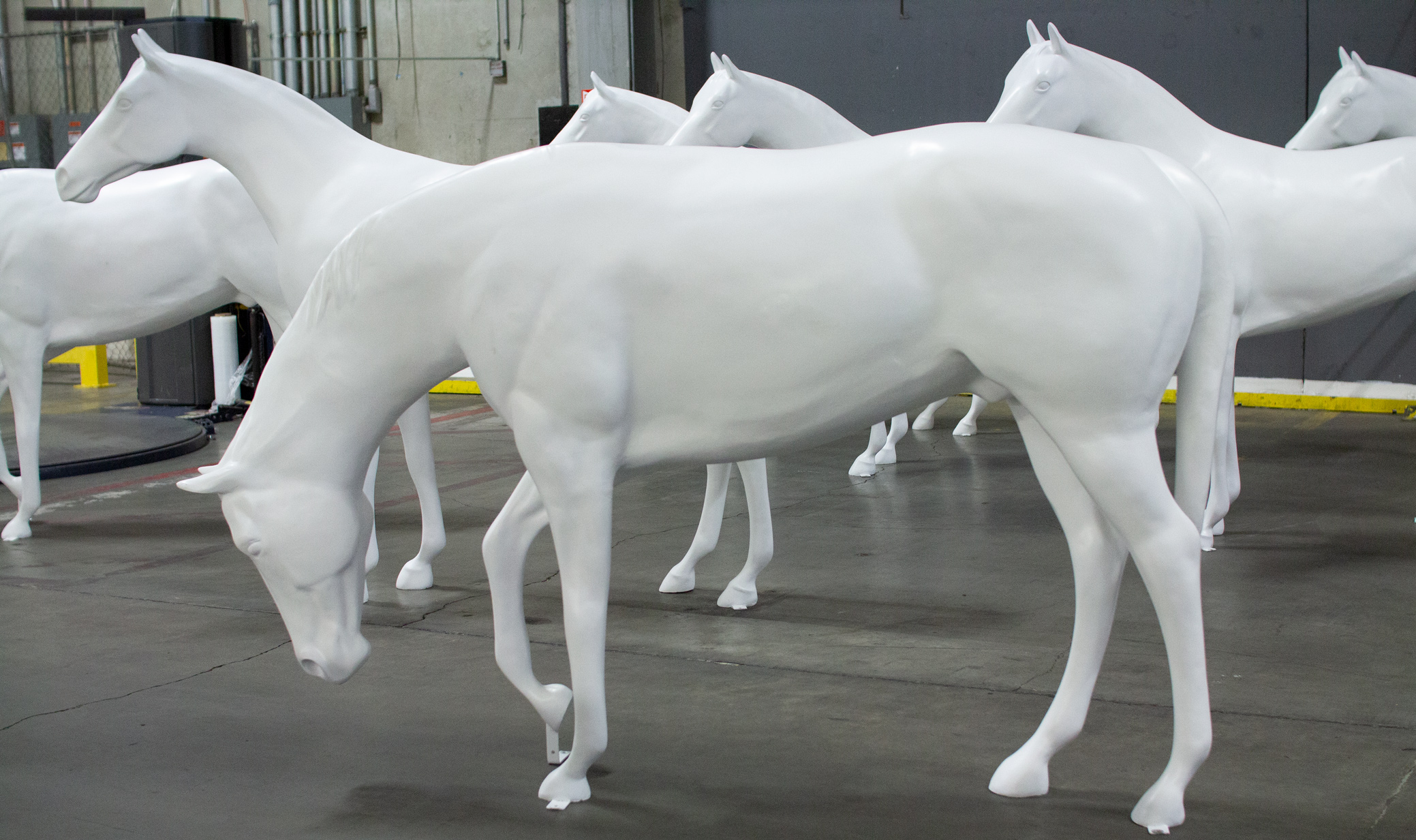 After the life-size fiberglass statues arrived by semi truck in Ocala, patrons attended an event in mid-December 2020 where they met the artists who would be painting their horses. 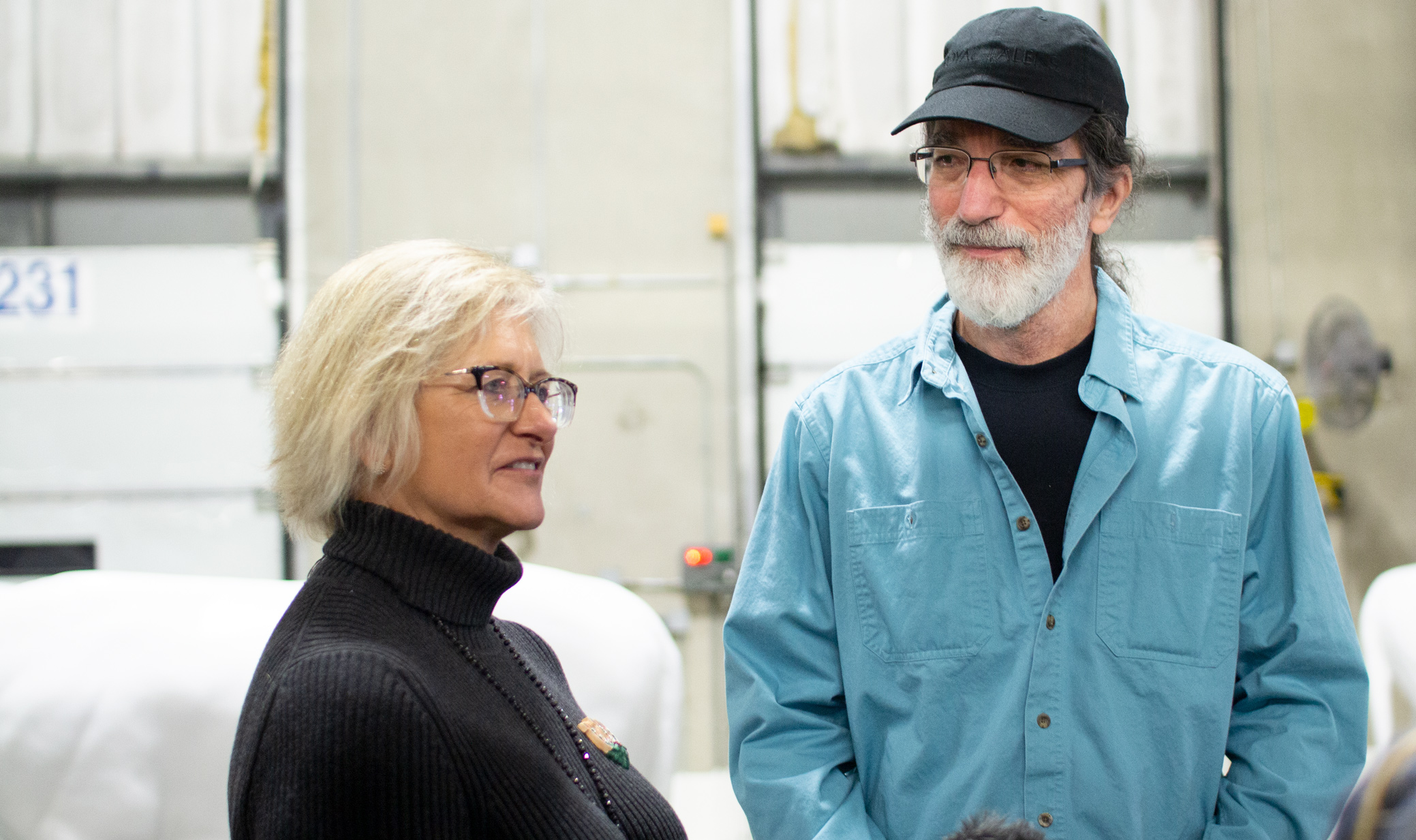 Artists then had about six weeks to complete their projects by February 1, 2021. Painted horses were clear-coated using a product similar to that used to protect automotive paint, a process performed by Liles Collision Service, Inc. Gene Liles and his team have been clear coating the horses since the first herd.

“We had a VIP party at Transformco to unveil the horses on February 11, and February 13 was the first time the community was able to see them there,” says Baillie.

Locally-based horse shipping company, Creech Horse Transportation, stepped up to move the statues as needed through the process.

The herd was transported to Circle Square Cultural Center at On Top of the World where they were displayed until March 26. The final stage of the project kicked off shortly after that with individual horses being permanently installed on a concrete pad at their patrons’ location of choice.

The community can expect to start seeing these new horses popping up all over town.

“I envision this being part of our art landscape forever and hope, in a number of years, we’ll introduce another herd,” says Baillie. 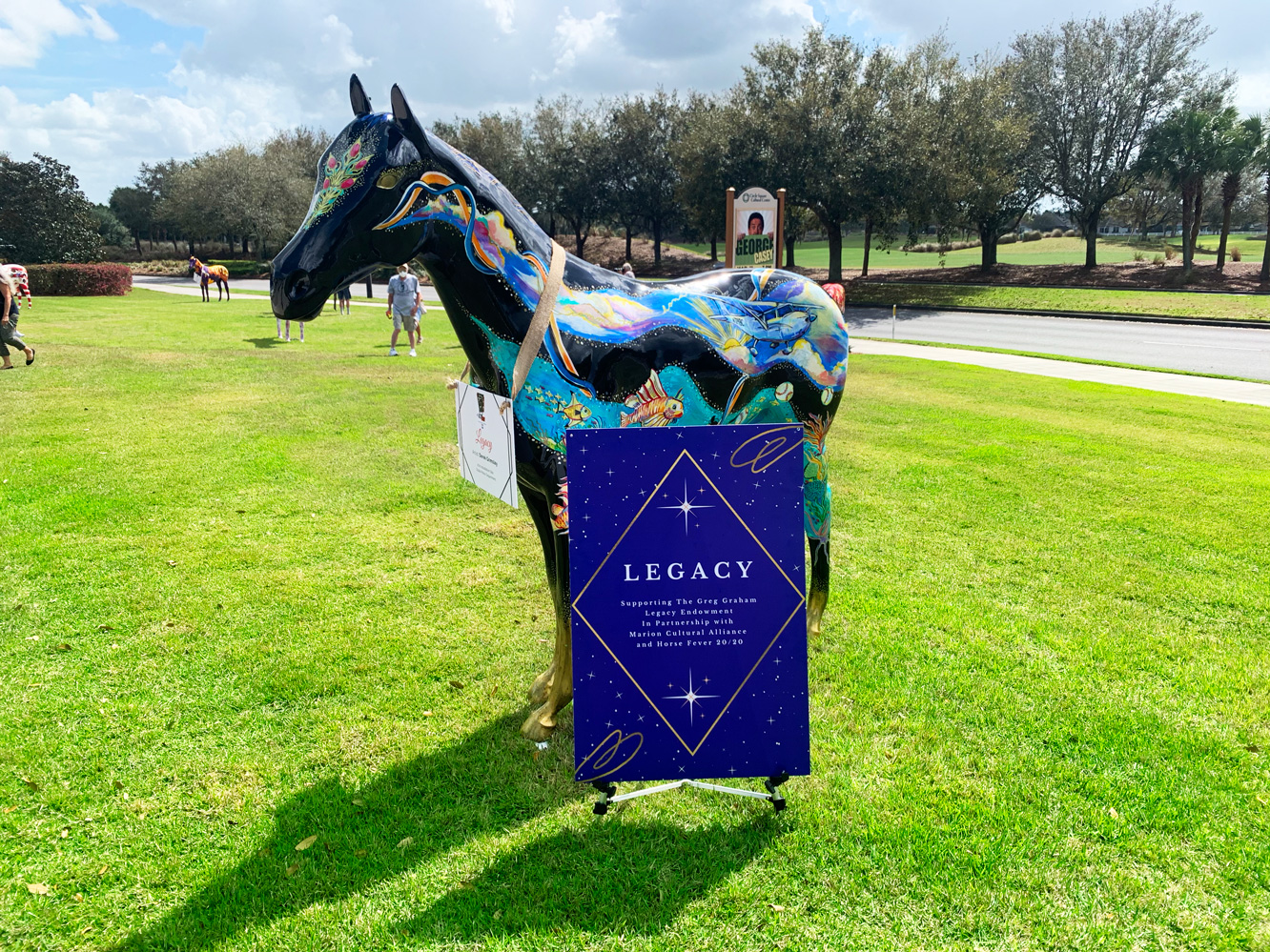 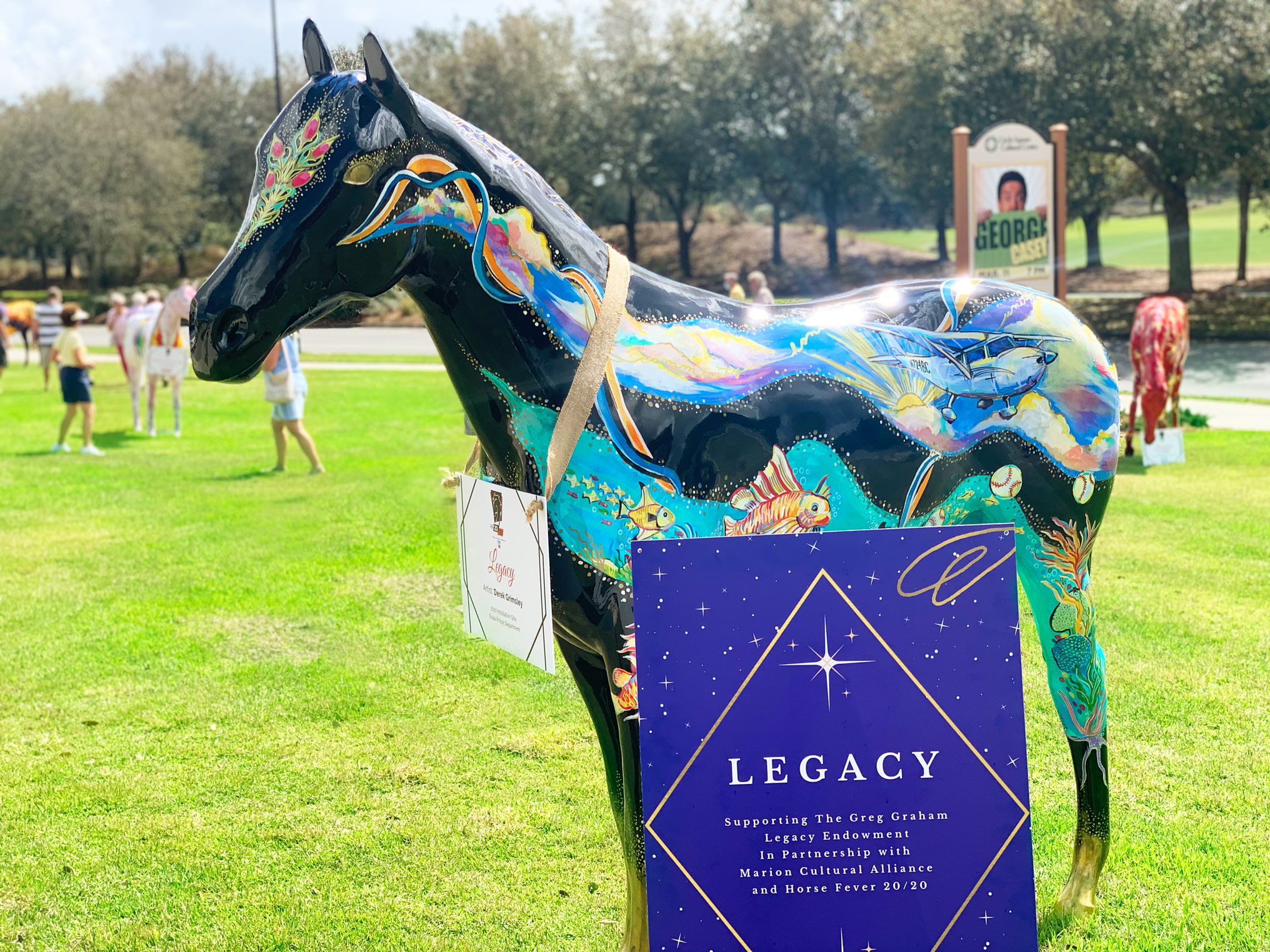 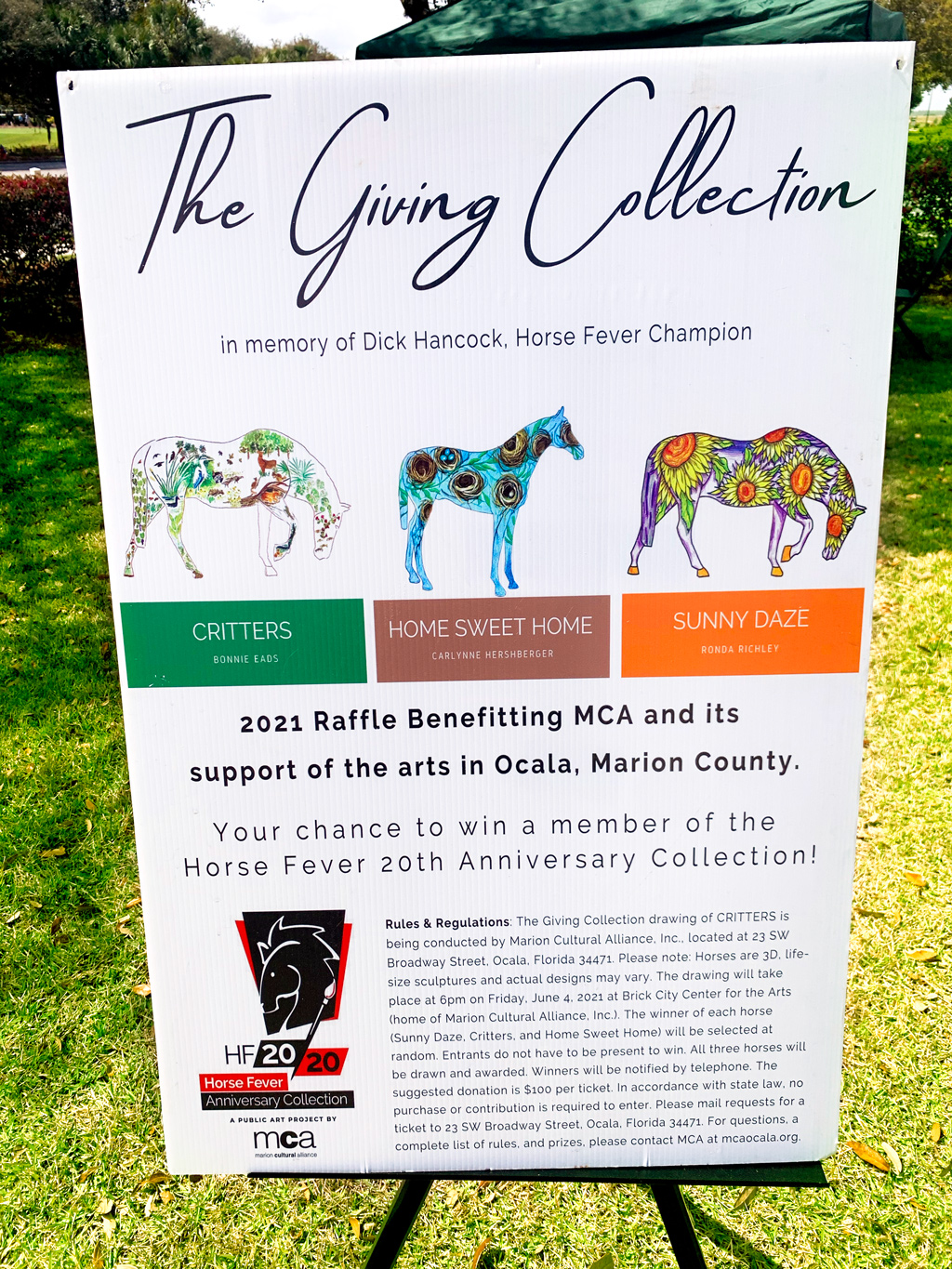 But Horse Fever’s latest adventure isn’t over yet. MCA is conducting a raffle for a chance to win one of three horses in The Giving Collection to honor the late Dick Hancock, former president of FTBOA. Hancock was an ardent supporter of Horse Fever and FTBOA has partnered with the project each year.

Tickets are just $100 and are available for purchase both online and at Brick City Center for the Arts.

All three horses in The Giving Collection–“Critters” by Bonnie Eads, “Home Sweet Home” by Carlynne Hershberger and “Sunny Daze” by Ronda Richley–will be on display at The Brick until the drawing at 6 pm during the opening reception there on June 4. (Local delivery and installation are included.) Proceeds will benefit MCA and its support of the arts in Ocala and Marion County.

Another sentimental horse in this year’s herd is “Legacy” by artist Derek Grimsley, created to honor Ocala Police Chief Greg Graham who died in a plane crash last October. Baillie says “Legacy” will be installed at the Ocala Police Department. 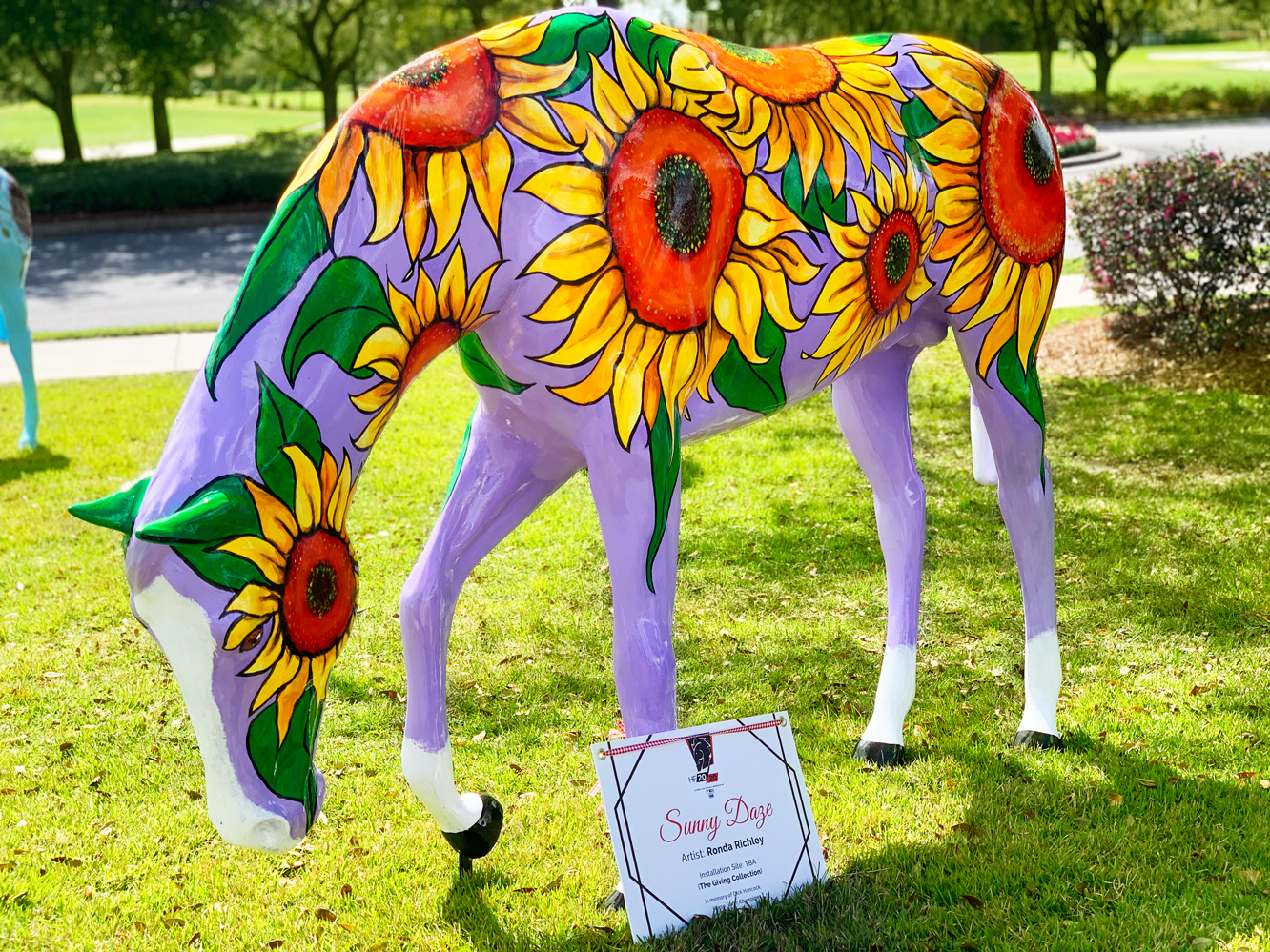 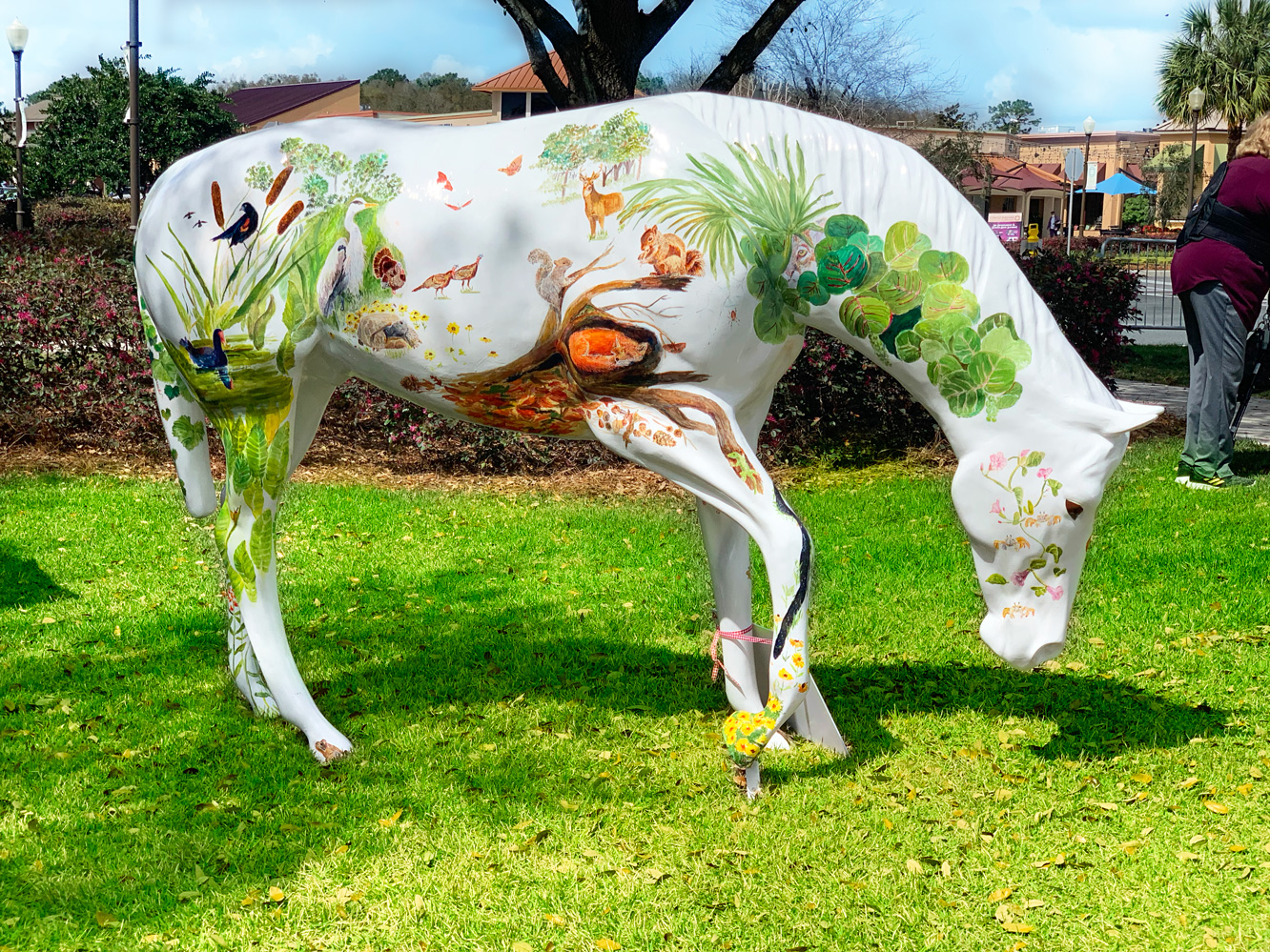 Blast from the Past

During the Horse Fever 10th anniversary project in 2011, Brent and Crystal Fernung of Journeyman Stud in Ocala purchased “Clockwork Fury,” the handiwork of artist Mark Hershberger, which resembles a steam-powered horse automaton.

“He’s been our greeter and ambassador for 10 years,” says Crystal Fernung. “People liked to take photos of themselves with him when they came to the farm.”

Fernung has served on the MCA board and is involved as an equine advisor. She’s also big believer in supporting local charitable efforts.

The Fernungs came up with the idea of donating Clockwork Fury to this year’s Horse Fever project with Ocala Breeders’ Sales Company auctioning off the statue at the end of their March Select 2-Year-Olds sale.

“Clockwork Fury had been through three hurricanes and every year he had bluebirds nesting in him,” says Fernung. “Mark brought him from 2010 technology to 2021. Now he lights up and even has a built-in generator. Mark preserved one of the bluebird nests and put it inside a panel that opens and has a robotic bluebird.”

Clockwork Fury sold for $30,000 with half the sale price going to Florida Thoroughbred Charities and the other half to MCA’s Endowment Fund. The Fernungs were tickled to learn that OBS employee Robin Andrews was the buyer.

“Horse Fever is so much a part of the fabric of Ocala. There’s something about horses that hits both the art world and people who love horses,” says Fernung, adding that Ocala now has more public art per capita than Chicago.

“Hope,” the striking turquoise and copper horse sponsored by Showcase Properties, is the work of long-time Ocala artist Paul Ware.

A graphic artist, fine artist, illustrator and photographer, Ware was born in Missouri, raised in New Hampshire and moved to Ocala in 1982. He launched Drawn By The Light, Inc., his full-service design studio, in 1998. 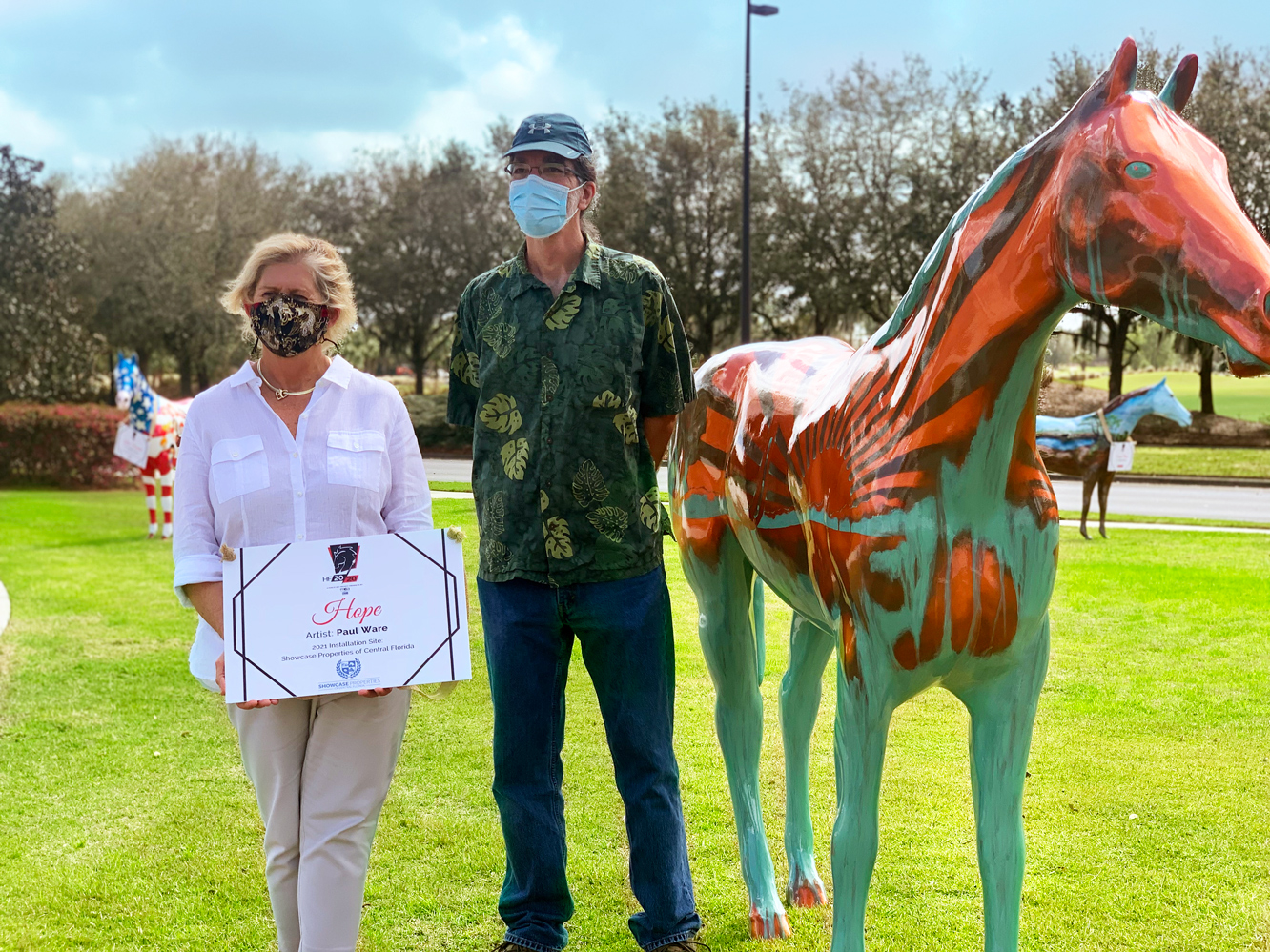 “Hope’s design was inspired by family members and friends dealing with cancer and is meant to honor anyone who’s had cancer in their life,” says Ware. “A family member was recently diagnosed and getting treatment as I was working on my horse.”

“The cancer theme hit close to home, as some of the agents at Showcase Properties have either dealt with cancer themselves or are involved in the fight against it. It fit in with supporting not just the community, but us,” says Dailey.

Ware ordered metallic, iridescent acrylic paints for “Hope” and got the idea from seeing the patina that had formed on his copper fountain. “Copper seemed appropriate because tarnish is a ‘disease’ of metal, so that played into the cancer theme,” he notes.

He painted the shockingly realistic Luna moth on Hope’s leg so that little kids could discover something fun on their level.

“I found it really rewarding to be at the Horse Fever events and talk to people. It’s interesting to hear their thoughts about the design and answer their questions,” adds Ware.

“The most frequently asked question is, ‘How long did it take?’ but I don’t want to go there,” smiles Ware, who admits that after putting in many, many hours, he quit keeping track of the time he’d invested in Hope. After all, he did it out of love and to support a public art project.

Ware is a two-time Horse Fever artist, having also been part of the 10th anniversary project in 2011. “That was a good experience and made me want to participate again,” he says.

Ware notes that the fiberglass horses are among the most unusual things he’s ever painted, along with a violin he once painted as part of a fundraiser project for the Ocala Symphony Orchestra.

“Hope is already installed at our office and anybody who wants to see him can stop by,” invites Dailey.

Ware plans to be one of the first visitors to see Hope proudly displayed in his permanent home at Showcase Properties. 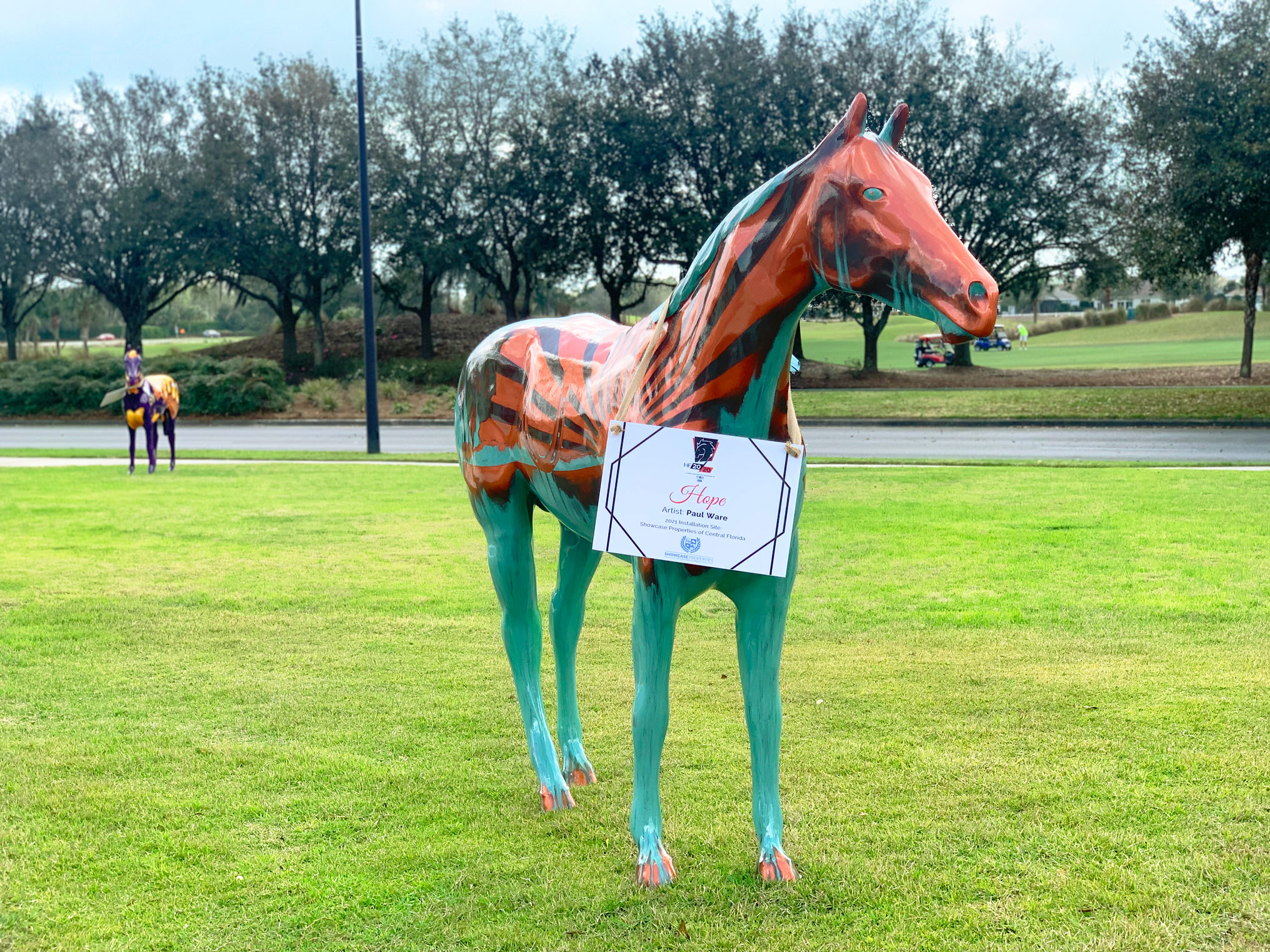 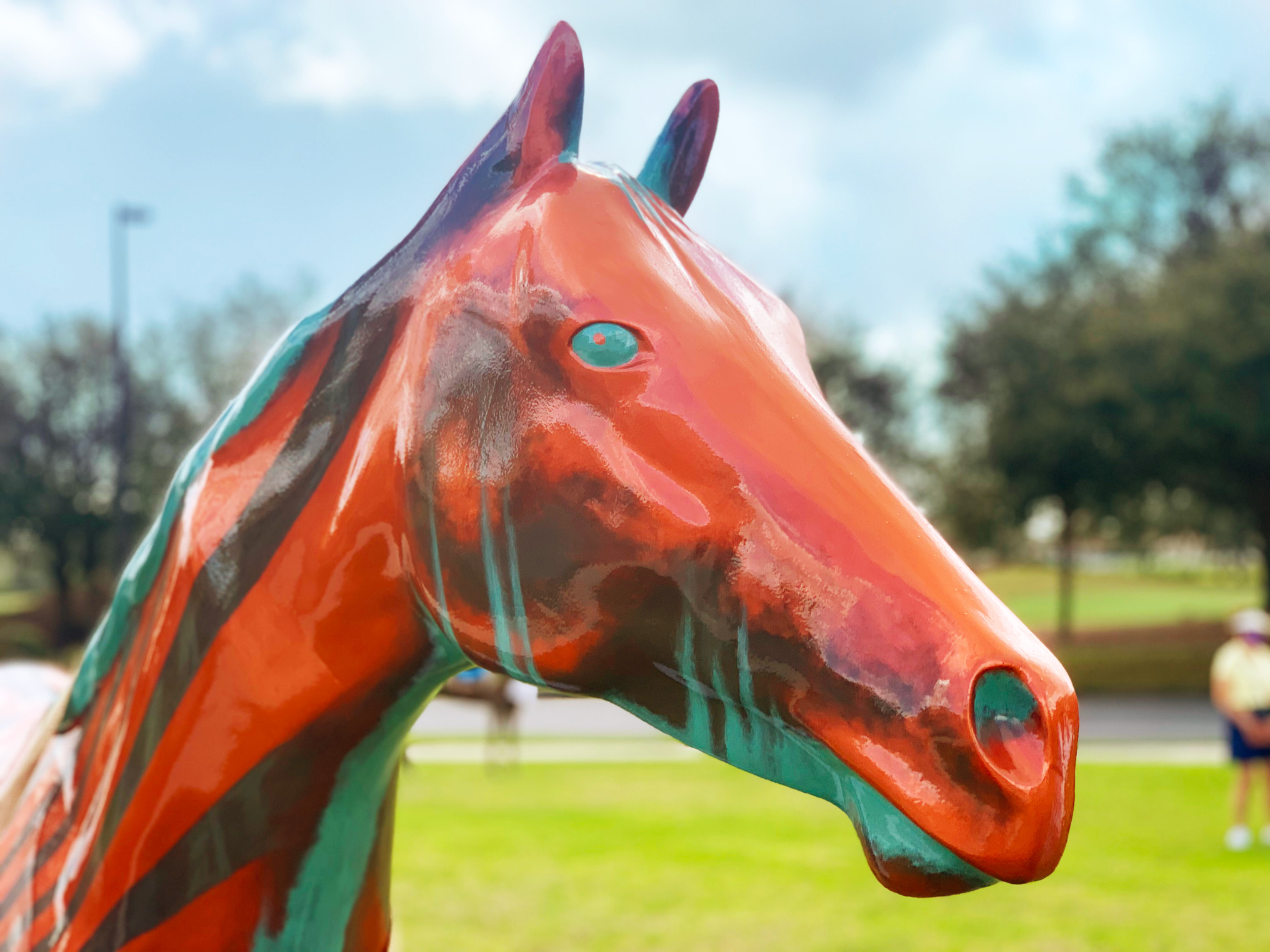 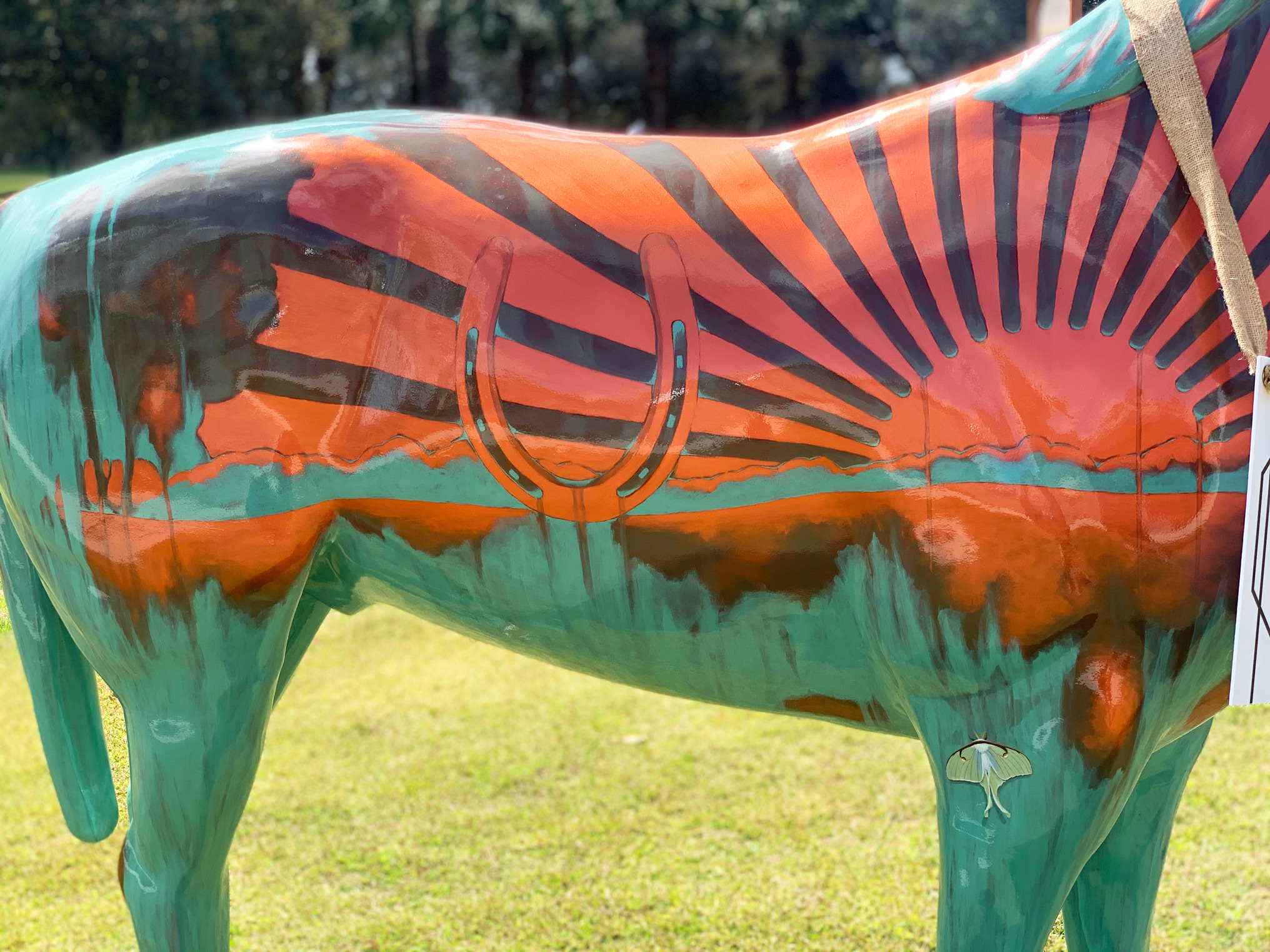 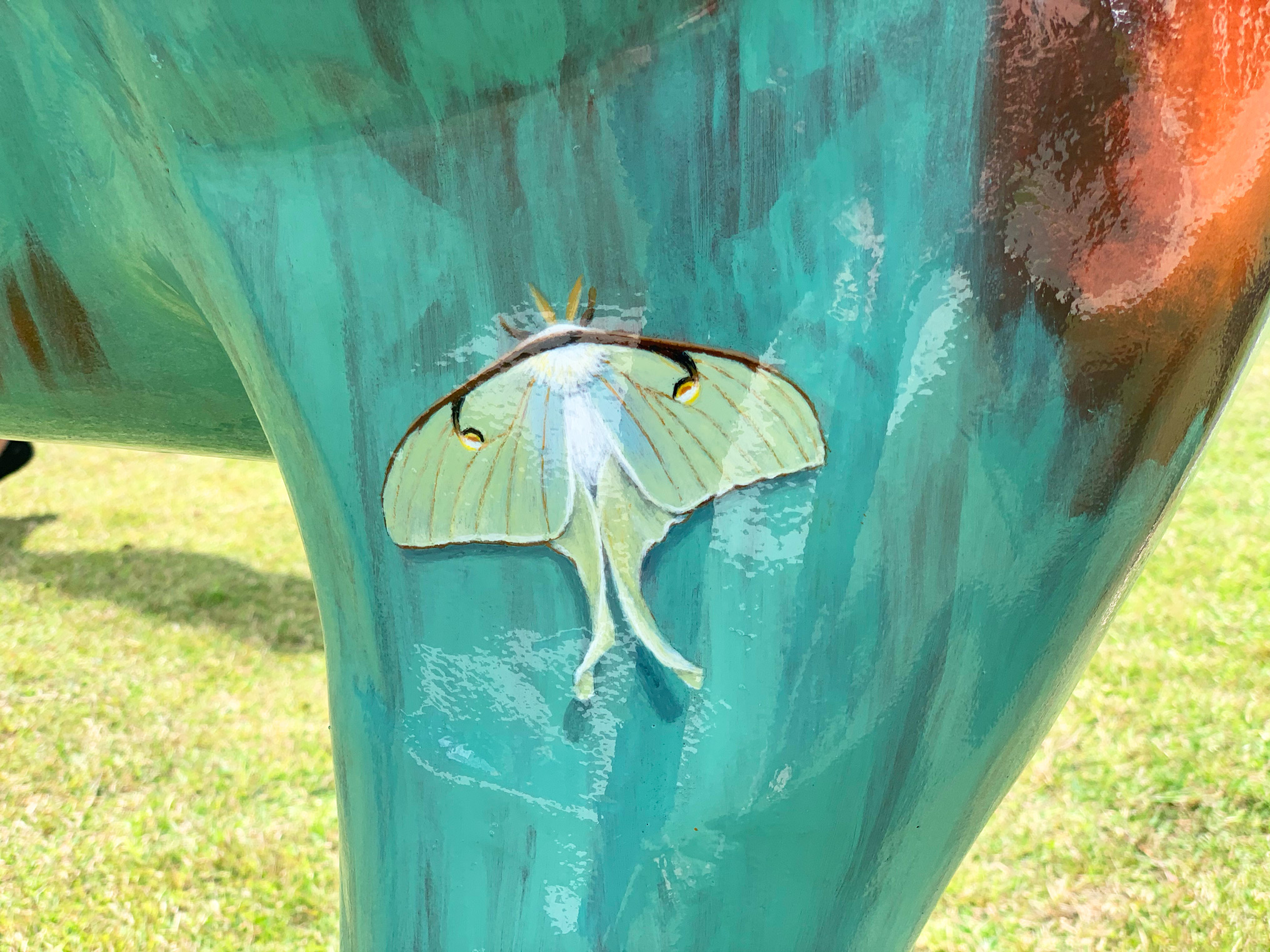 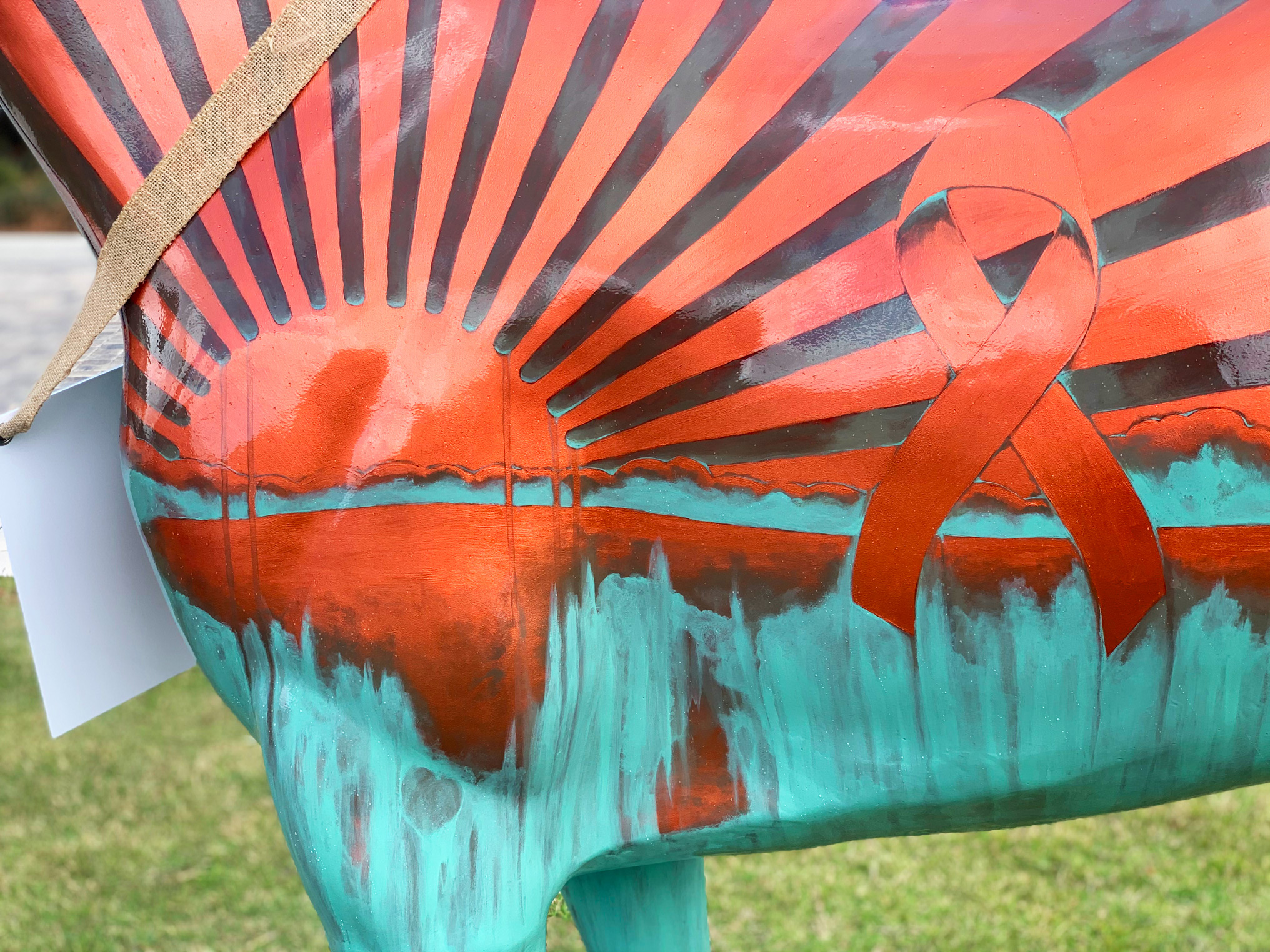 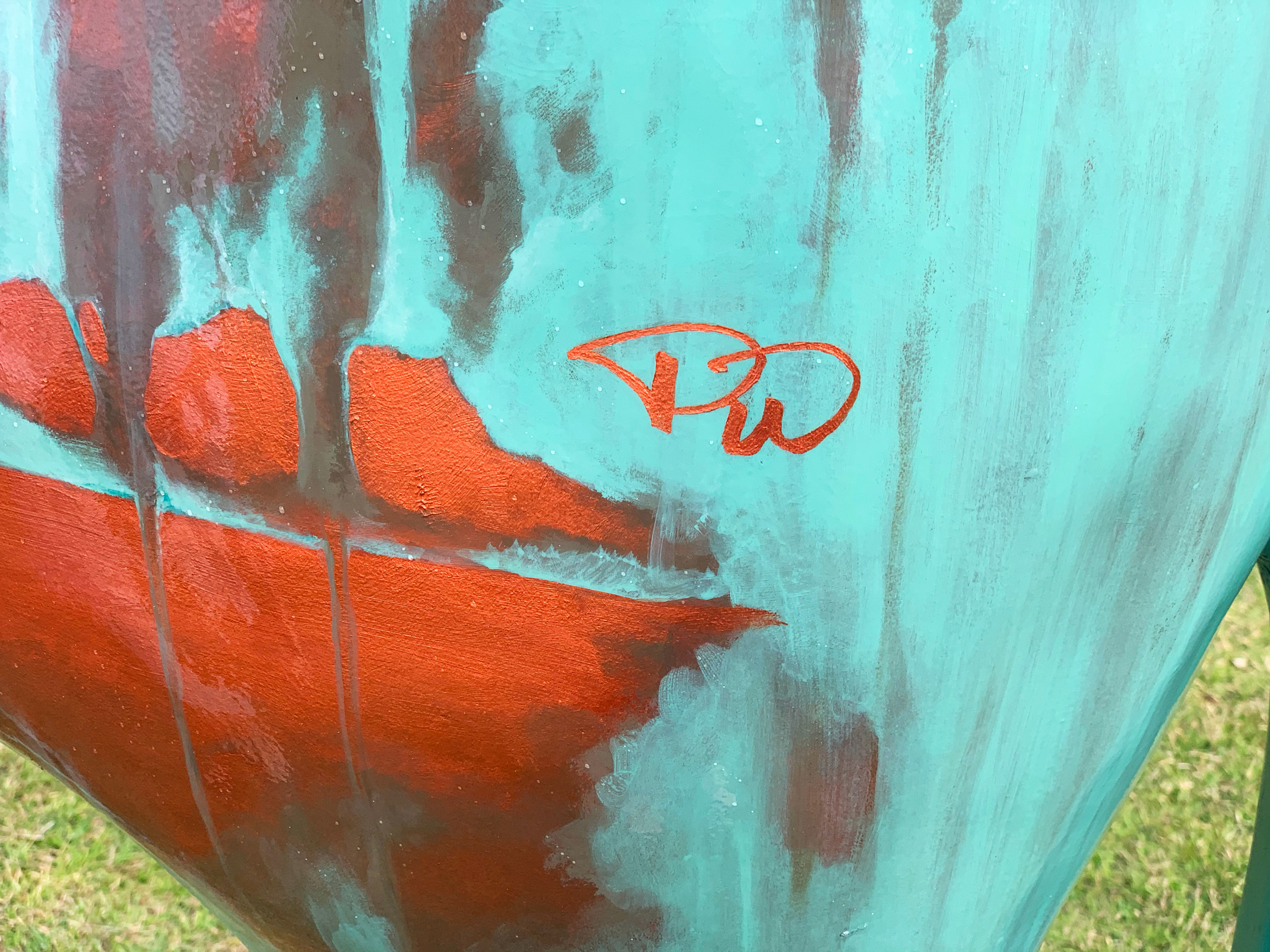